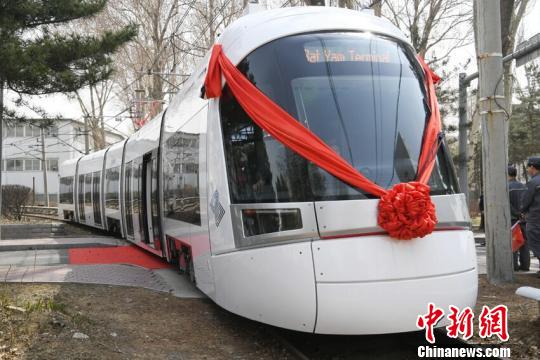 CHINANEWS Changchun, April 16 (Li Yanguo, Guo Jia) The first train of the Tel Aviv Red Line Light Rail Project in Israel was launched on the 16th in Changchun. This is the first time that 100% low-floor trains in China have been exported to developed countries. The train development company Zhongche Changke Co., Ltd. (hereinafter referred to as “Chongzhou Changke”) introduced that the project black technology blessing is the highest level of light rail vehicle in the world.

The reporter saw that the 100% low-floor train that was off the assembly line was streamlined, and the transparent front windshield was integrated with the driver's side window. The car is white and inspired by the youngest world heritage site, Tel Aviv White City, Israel.

Wang Lijun, project manager of the project department of CSR's overseas business department, said that this is the first time that the “Made in China” 100% low-floor train was exported to developed countries. The design and manufacturing process of the vehicle was carried out by European senior consultants and supervisors, and the safety assessment was carried out according to European standards. The design meets both European and Israeli standards.

Wang Lijun introduced that the train adopts explosion-proof design, and the roof uses closed circular arc-shaped cover. If a bomb falls into the roof, it will slide down the arc; the steel structure of the train underframe adopts non-ferromagnetic material to prevent the magnetic bomb from being adsorbed. The bottom of the vehicle; the window is equipped with explosion-proof glass, which can withstand the impact of the explosion of stones and burning bottles.

In addition, pedestrian protection devices are installed at the lower end of the train. When pedestrians or foreign objects invade the direct trigger device, the pedestrians are dragged to avoid secondary injuries caused by the vehicle being crushed.

In terms of fire resistance, the train adopts Israeli standards, and the underframe structure meets the 15-minute combustion-maintaining integrity requirement. When the vehicle is in a fire, it can ensure that passengers have enough time to evacuate.

Wang Lijun said that the project cooperation mode has been expanded from vehicle supply to provide Israel with a wider range of rail transit solutions, forming an export model of “product + technology + service”. The downline of the first train will produce a demonstration effect of China's rail transit products, which will help "long-distance manufacturing" to radiate high-end European markets.

The city of Tel Aviv covers an area of 52 square kilometers and has a population of 40% and half of the workforce in Israel. The 23-kilometer red line of Tel Aviv is Israel's first light rail line and is scheduled to open in 2021. (Finish)

(This article is from China News Network)